This is the second installment of a multi-part series on how you can increase your staffing agency’s sales.  Part 1 is here.

Last week we discussed how to better efficiently use your time as a salesperson to avoid giving irrelevant players the elevator pitch and wasting valuable sales time.  This week we will discuss how salespeople can better utilize their time for more quality prospecting, and how owners or managers can use their positions to help close more deals.

The Sales and Prospecting Time Conundrum

The thing about sales is that the amount of time that salespeople can spend on actual prospecting and selling is generally limited since it’s mostly frowned upon to call before or after business hours.  Prospecting time can be further limited by when your market is best available to receive your calls or visits.  Typically, there are best-prospecting windows of time between 7am to 10am and 4:30pm to 6:30pm.  That’s a total of just five hours a day available for prospecting not including sales meetings, prospect meetings, continuing education classes, etc.  You could get lucky and reach a prospect outside of these hours of course, but this article is written about how you can best use your finite amount of sales time, so we’ll concentrate on the best-case scenario and the best practices that I’ve come to utilize myself.

When I worked in telecom and now in Business Intelligence for Staffing sales, I came up with a great formula that applies to every salesperson whether you sell thermometers, oil, or staffing services:  x calls = y sales.  I know that sounds simple but it is invariably accurate because it’s based on the average number of calls that it takes to get to a sale (or an appointment or a meeting or whatever you consider a success.)  Allow me to explain.

The Prospecting Formula that NEVER FAILS

If you make x number of calls, you will get y sales.  It’s really that simple.  If you are always selling the same product or to the same market, you can count on the average only moving slightly over time which gives you an excellent way to predict your current and future sales quite accurately.  Now, to be fair, you have to track the real number of calls you make (whether in-person or via telephone) and you have to be honest both with yourself and with your sales manager.  You have to be willing to take a hard look at your actual activity and make adjustments to increase that activity if necessary.

In addition to being in sales, I happen to also be a software developer and one of the sayings that we use in development is, ‘Garbage in, garbage out.’  Simply, if you try and cheat the formula by not recording the actual number of sales calls you make, then you will not have an honest look at how many calls it takes to get to a sale.  Be honest with yourself and your sales manager; it will pay off in spades.  Let’s use an example from my telecom sales days that still applies to staffing sales and every other hunter sales job.

If I started making calls at 7am and I called until 10am Monday through Friday, at least in the old days, I would have

made about 10-20 really good sales calls.  By ‘really good’ I mean that the prospect was qualified to buy my services and their phone was in good working order.  I counted all calls except for numbers that were disconnected.  I counted voice mails, gatekeepers and any other call where the prospect was qualified for a follow-up call.  My objective was always to get at least three new face-to-face meetings every single week with new prospects who I would always pre-qualify ahead of time on the telephone.  I didn’t want to waste their time or mine so a few questions ahead of time would always determine whether they were a real prospect or not.  Some salespeople will take any meeting no matter how unqualified the prospect is.  I would urge you to do a basic pre-qualification with the prospect ahead of time to save yourself wasted time with people who absolutely aren’t a good fit for your services.

What I discovered was that I would get one new meeting about every 50 calls.  So, it took me 50 calls to get to a ‘Yes. I’ll meet with you.’  That may sound like a lot, but I assure you that armed with that knowledge and actually seeing it play out in action, was AMAZING.  Why does it work?  Because it’s based on the average number of calls you make and averages don’t lie.  Using my average above, you may have to make 99 calls to get one appointment, but then you may get the very next appointment after just one more call.  That is the magic of averages.  Trust me; it works.  Just ask any banker or economist.

Knowing that I only had to make 50 calls to get an appointment gave me unbelievable confidence and made it much easier to pick up the phone and make call after call until I finally got to a ‘yes.’  And that’s all I cared about, was getting to that yes.  Every ‘no’ was one step closer to getting a ‘yes.’  It’s THAT SIMPLE and IT WORKS.  Try it. 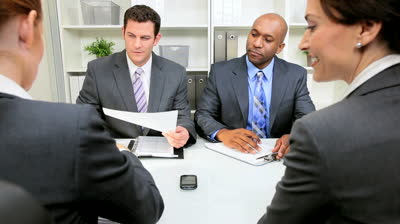 In the early days, my sales manager Mike was instrumental in closing deals.  I would come up with prospects and Mike would go along on the sales calls to make sure things went smoothly.  As I became more experienced and could easily close my own deals, I continued to ask Mike to go along at the closing anyway, because the two of us together were unstoppable.  If Mike and I ever got into the same room with you, you were going to sign the contract and we were going to complete the sale; period.  We rarely lost any deal together.  It’s not that I don’t have closing skills or that Mike is a superior salesperson; it’s that the combination of us together was unstoppable.  You can’t think of everything on your own and you won’t get along with every personality type but if there are two of you, you might be able to find that at least one of you will fit well with the prospect’s personality.  It’s a double-dream-team combination when you have a strong salesperson and a strong sales manager.  It’s nearly unbeatable and no matter how experienced you are, you will close more deals with a good sales manager than without.